Log in to see your saved listings or edit your searches:

No account? Sign up now to save searches, listings, and get tailored listing notifications. It's free, opt-out anytime.

Save Your SearchRefine Search

Rye was first established by David Thompson in 1623 at Odiorne's Point, the site of the first settlement in New Hampshire, called Pannaway. It was originally called Sandy Beach and was part of Portsmouth. It became incorporated as Rye, named after the borough of Rye, England in 1726.

Picturesque Rye has a coastline of just 8 miles, dotted with old names such as Wallis Sands, Jenness Beach, Locke's Neck, Ragged Neck, Rye Harbor, and Odiorne Point. In 1876, the thriving village of Gosport on Star Island in the Isles of Shoals was annexed to the town. Rye is the only New Hampshire town with Atlantic islands, having annexed four of the Isles of Shoals; the remaining five islands belong to Maine.  Rye is a lovely community that is located close to Portsmouth. 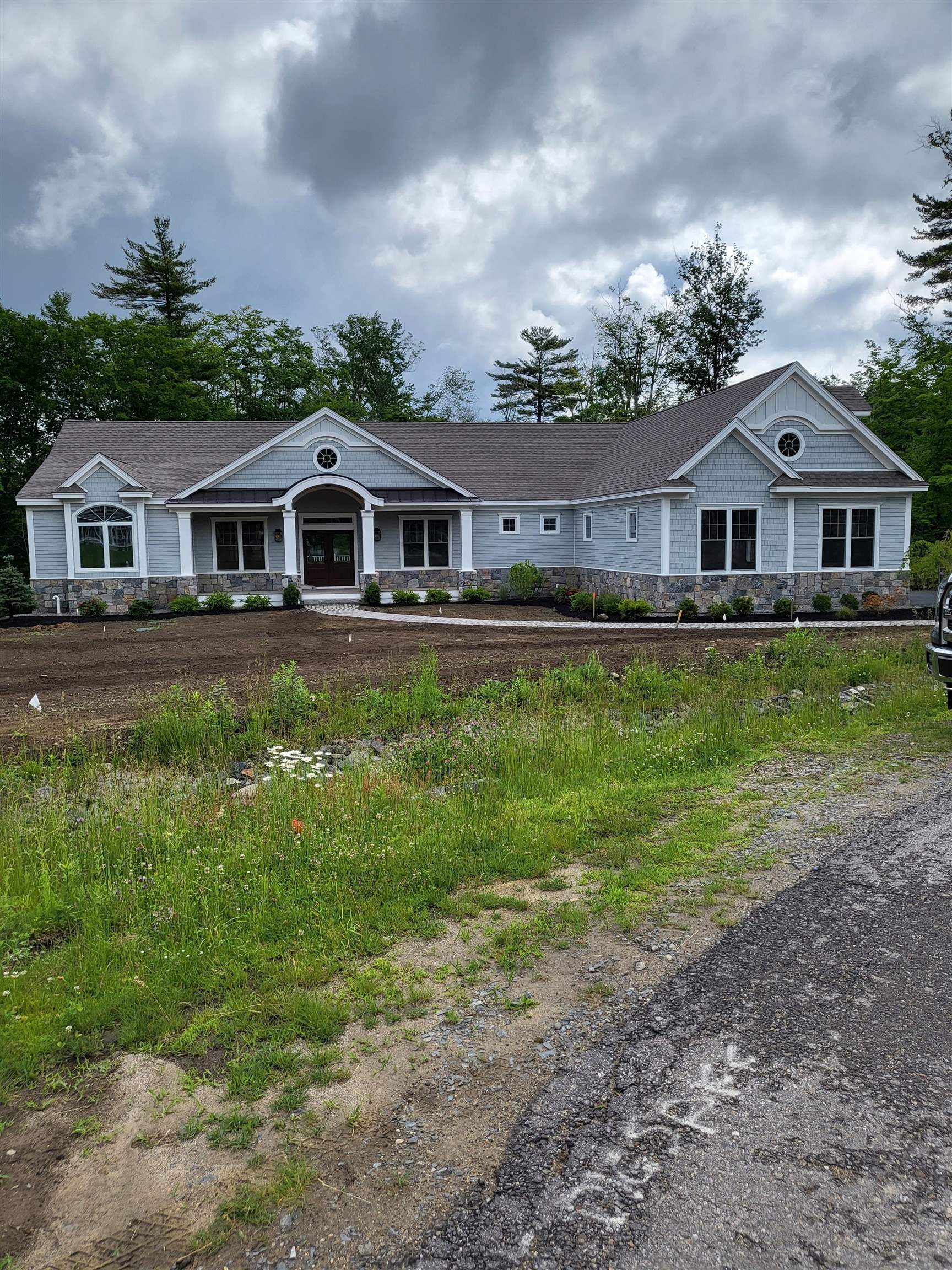 Beautiful Custom Home to be built by Persimmon Homes LLC Open concept front to back living in this open floor plan. One level living with lots of options there is also a full walk out lower level that is unfinished with 1765 sq ft. Main floor boast a master bedroom with walk in closets, soaking tub and large separate shower. Home office, 1st floor laundry with large foyer to great guest as well as a, great room, kitchen with breakfast nook and walk in pantry .with access to a sunroom with gas fireplace. The kitchen is large and open to the great room with another beautiful gas fireplace. Two private bedrooms, with bath and first floor laundry on the other side of the home from the master. Attached 3 car garage with direct entry to the home. Nice covered front porch leading in to the front entry.

Rare opportunity to own an authentic year-round Rye Harbor beach house that has been in the same family of seafarers & boat builders for nearly 100 years. This handcrafted cape style home offers the casual elegance of shiplap & wide pine floors anchored with hand-forged nails. Driftwood beams from local shores are a unique design feature found throughout the open & airy floorplan, with three lofts & finished wooden boat workshop/creative space. Enjoy endless sunlight, ocean views, harbor side vistas, secluded beaches & conservation wetlands. Listen to the crashing waves & the distant sounds of the lighthouse as coastal breezes & the essence of native sea roses & salt air remind you of what Rye Harbor living is all about. Tall pines, marsh grass & conservation land, add natural elements of backyard privacy perfect for outdoor living & family fun. Located within a highly desirable community of luxury homes at the end of a shared private driveway, this one-of-a-kind home is truly a work of art that must be seen. 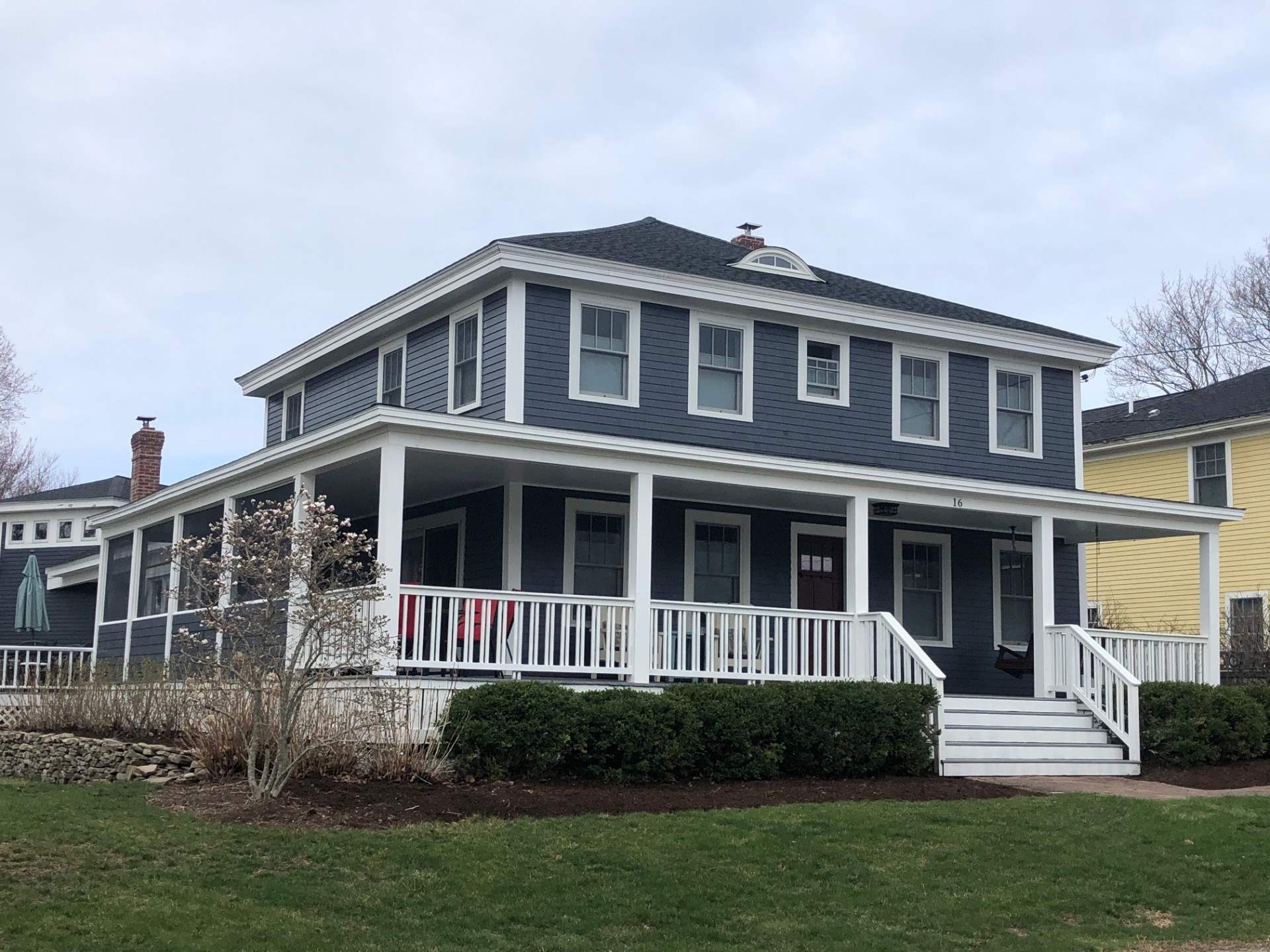 Live next to the most sought after shoreline in NH. Just steps from Jenness beach sits this beautiful 1850 classic New Englander on a rare oversized lot with a 4 car garage! Completely renovated top to bottom right down to the studs in the past 2 years. You have heard the term "not a drive by" Never does it apply more than to this stunning transformation. On the outside you have a classic look with an enormous wrap around porch both open and screened in. Multiple areas to relax, take in the refreshing salt air and listen to the crashing waves. Enter the front door and be wowed! High ceilings, a casual open concept and a stunning design. Perfect for beach living at its best. Entertain in the enormous cathedral ceiling great room/kitchen area. The kitchen features cabinetry and design by the area's top custom cabinet maker, Jewett Farms. It was featured in North Shore magazine and was a winner in the Clarke Sub zero kitchen design awards. To much to list here and a must see if you want it all. New roof, new hvac, high performance spray foam insulation, sunken outdoor hot tub & outdoor shower...... This home works equally well as your summer beach retreat or a full time residence. Enjoy the Seacoast life! 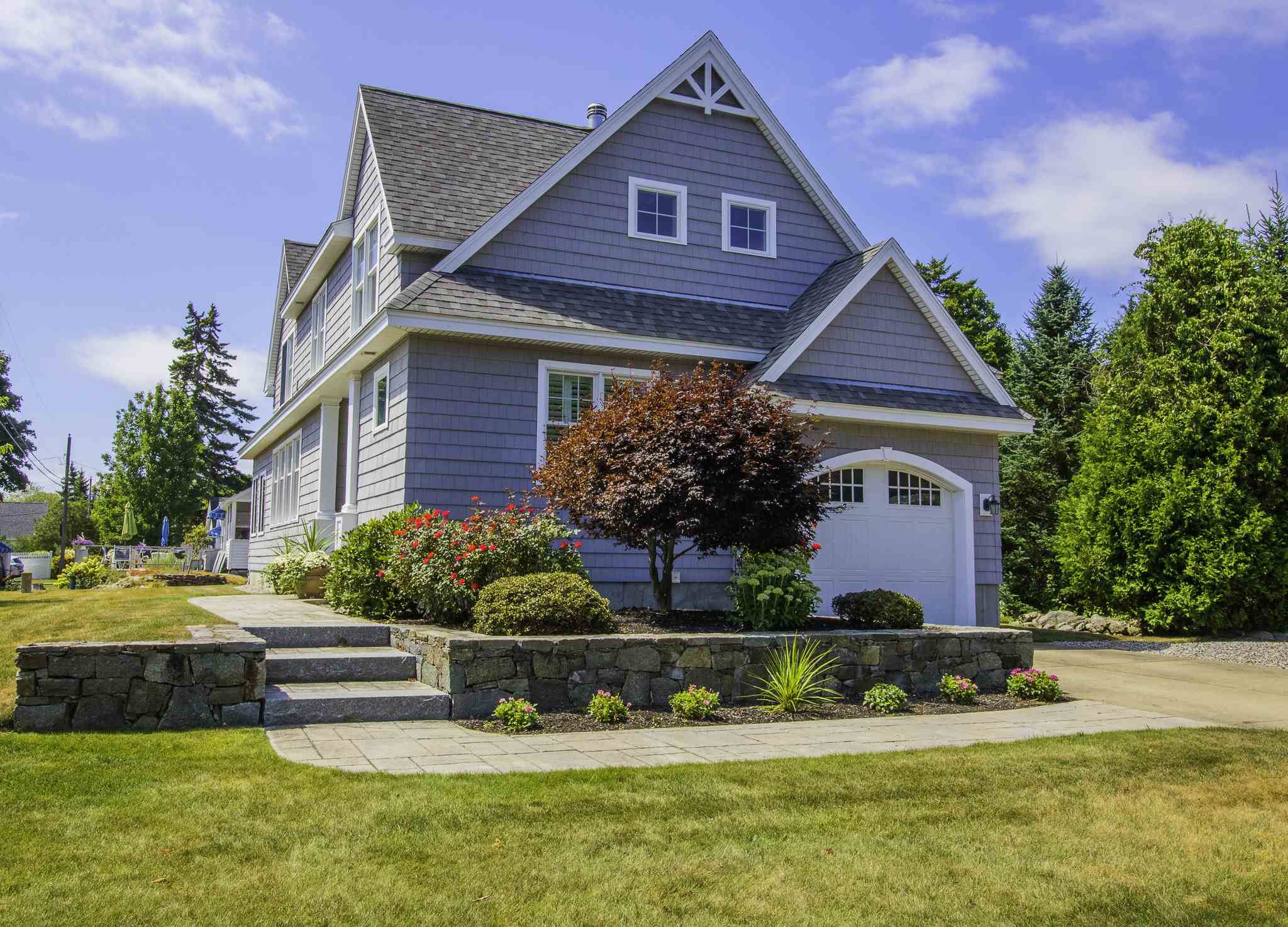 All the amenities and completely furnished is this 2006 beautifully built, 1 & 3/4 story New Englander with views of the Atlantic Ocean and Isles of Shoals. The elevator will take you to the Two large bedrooms and study turned to bedroom with twin beds on the second floor. Look at the ocean from the open spacious master w/ large master bath. Large second bedroom with bathroom right outside the door. Private study being used as a guest room with twin beds in photos. Open Office space in the hallway. Laundry conveniently located near bedrooms. On the first floor is an updated kitchen with granite counters & stainless appliances & gas stove for cooking. There is a large granite island w/custom wood cabinet surround to separate the kitchen from the living room, but still allowing an open concept. Living area has beautiful stone gas fireplace. Separate Formal dining room and four season sun room. Large 1/2 bath. Direct access from the one car garage to the house. Generator and central air. Beautifully landscaped yard. Owners responsible for mowing and plowing. One Year rental minimum. No pets. Available May 1. Yearly Only 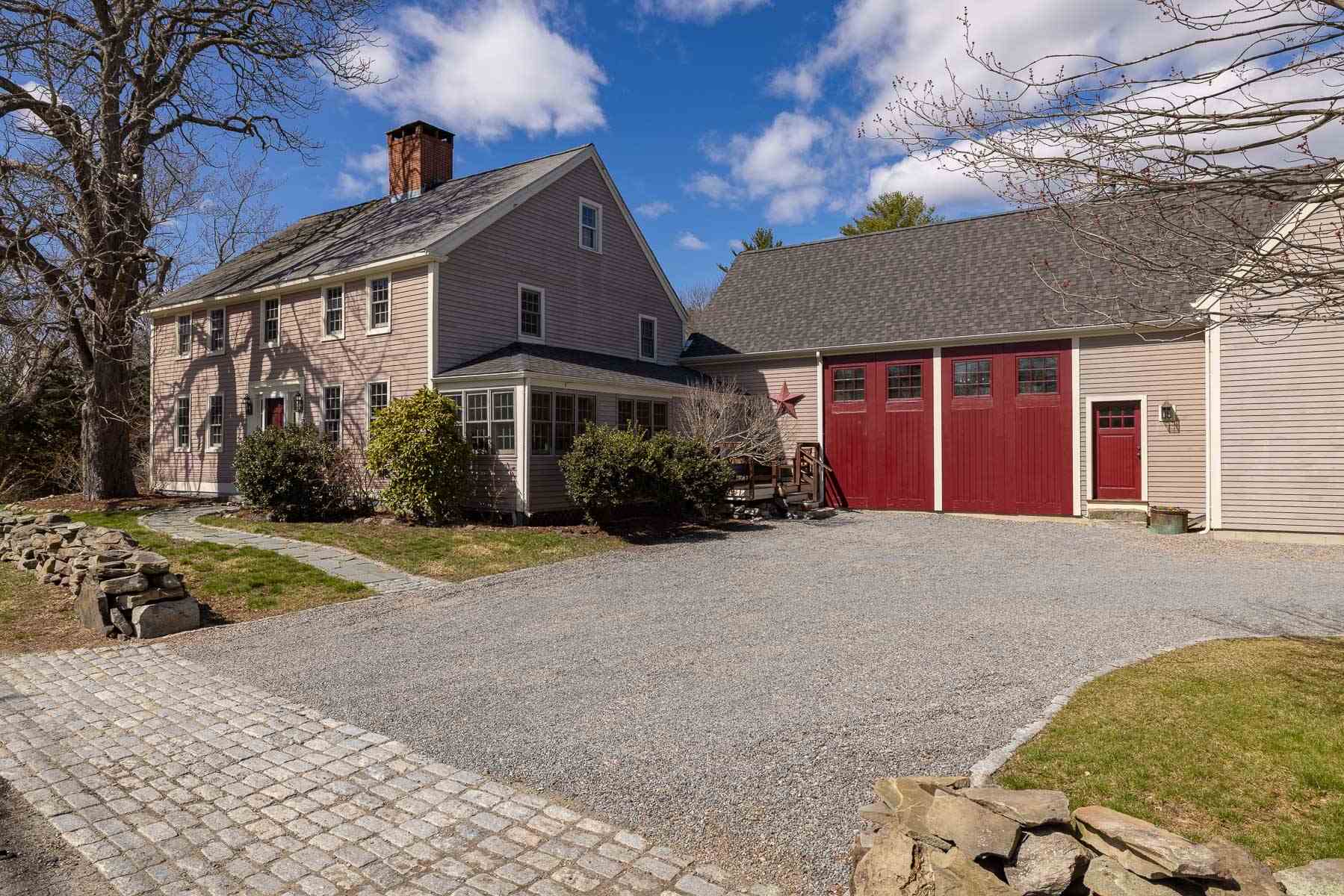 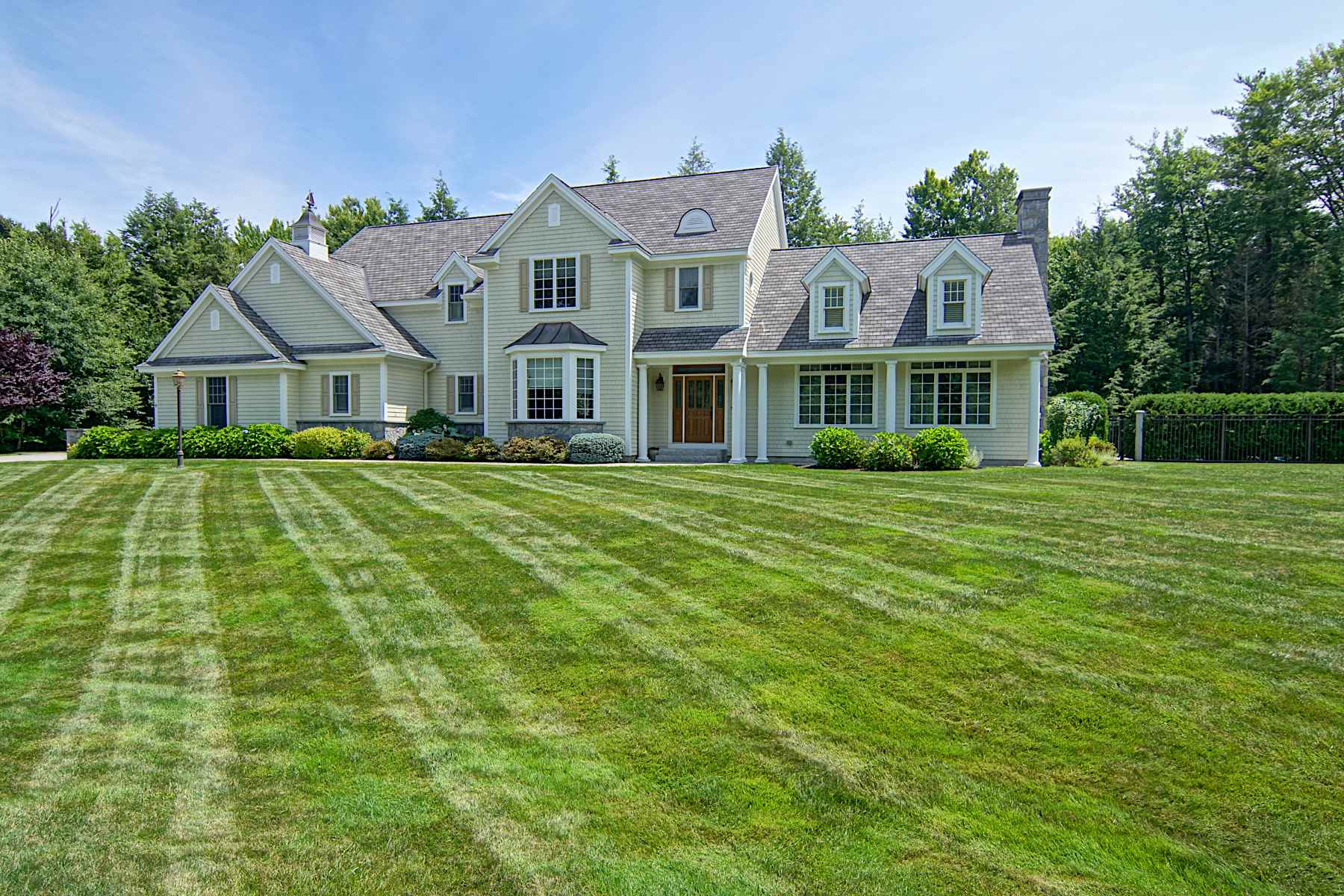 Whether you are a city dweller reimagining your lifestyle near the calming coast of NH, or looking for your next home in the coveted community of Rye, this custom contemporary cape may be just what you have been searching for. Meticulously maintained, exceptional craftsmanship and high-end finishes throughout, the home sits on 2.75 manicured acres abutting conservation land. Perennials dot the landscape, a heated, salt water pool with adjacent gazebo invite relaxing days poolside or dining al-fresco. A spacious layout provides the perfect marriage of an open concept design with practical pockets of personal space. Soaring ceilings in the family room feature a fieldstone fireplace and French doors leading to the outdoor patio. A chef's dream kitchen includes Viking appliances, large island, custom cabinets with ample storage space and generous granite countertops. The adjacent dining room with its wainscot walls inspires family gatherings. Upstairs, the master suite features a gas fireplace, large, custom California Closet, & radiant heated marble floors with double vanity & tile shower in the en-suite bath. An office just off the master offers a private work space. Two additional bedrooms & full bathroom complete the second floor. The partially finished basement is a perfect flex space for a gym, additional office or teen lair. A fourth bedroom & 3/4 bath provides a private space for guests. Delayed showings begin Sat. April 10 by appointment 11-1pm & Sun. April 11, 12-2pm. 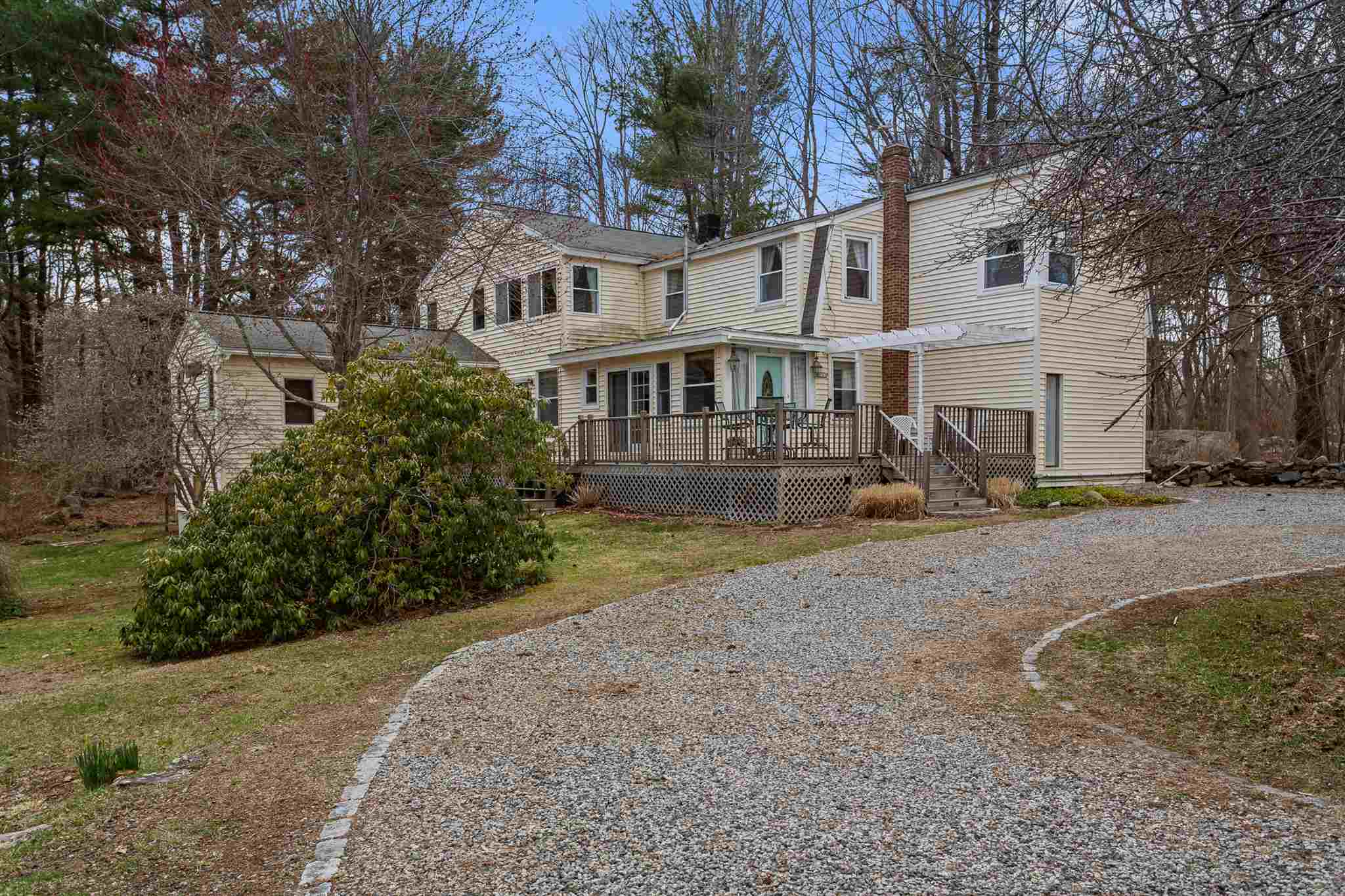 May to November rental within walking distance to Wallis Sands and Pirates Cove Beach. Enjoy the best time of the year for beach weather in this spacious home. Circular drive with plenty of parking. Front wrap around deck for watching the beach goers plus private deck and screened porch in the rear overlooking the pretty back yard. Eat in kitchen with island. Dining room looks out onto the screened porch and is open to family room with vaulted ceilings. Great layout for entertaining. Additional living room in the front of the home. Laundry and 1/2 bath on the first floor. The second floor has two bedroom and a full bath. The larger bedroom could fit a queen sized bed. Currently furnished with a full. House is fully furnished as shown. Dishware and kitchenware included. Trash pickup and lawncare are included. Just show up with your beach toys! Credit check required. No pets. No smoking.

Unique opportunity to build your dream home with water views in Rye! Set on an elevated .78 acre lot, this sunny location in the Harborview Estates neighborhood is a brief walk to the Wentworth by the Sea Country Club, the Wentworth Hotel and Marina, and a short family bike ride to charming Portsmouth. 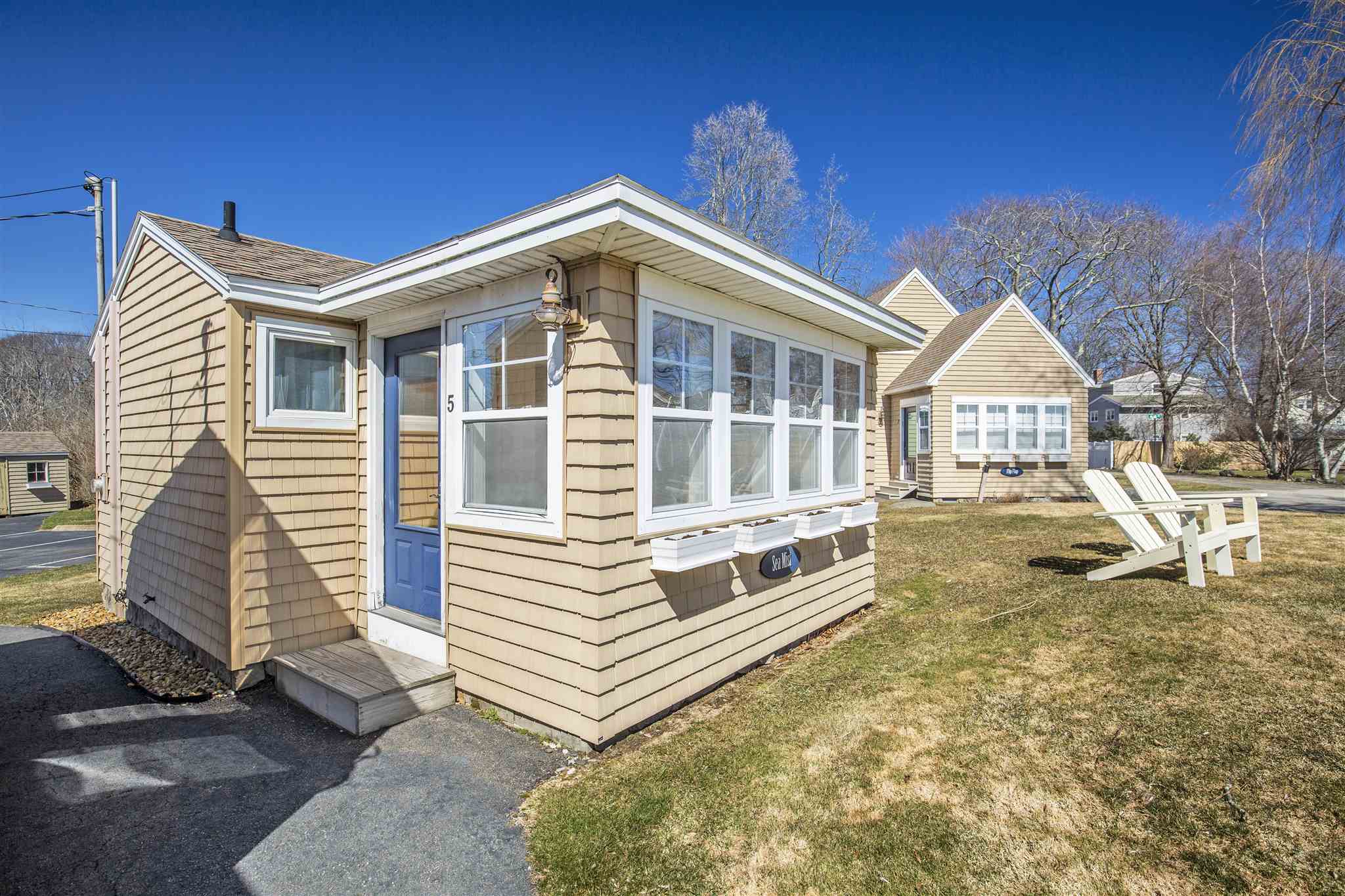 Rare opportunity to own one of the coveted cottages at Wallis Sands Place! Wallis Sands Beach is directly across the street from this charming one bedroom seasonal home, making it the perfect getaway or vacation rental. This home was completely renovated in 2009 & features bamboo flooring throughout. Impeccably kept grounds allow you to focus on rest & relaxation, not yard work. Cats & dogs welcome! 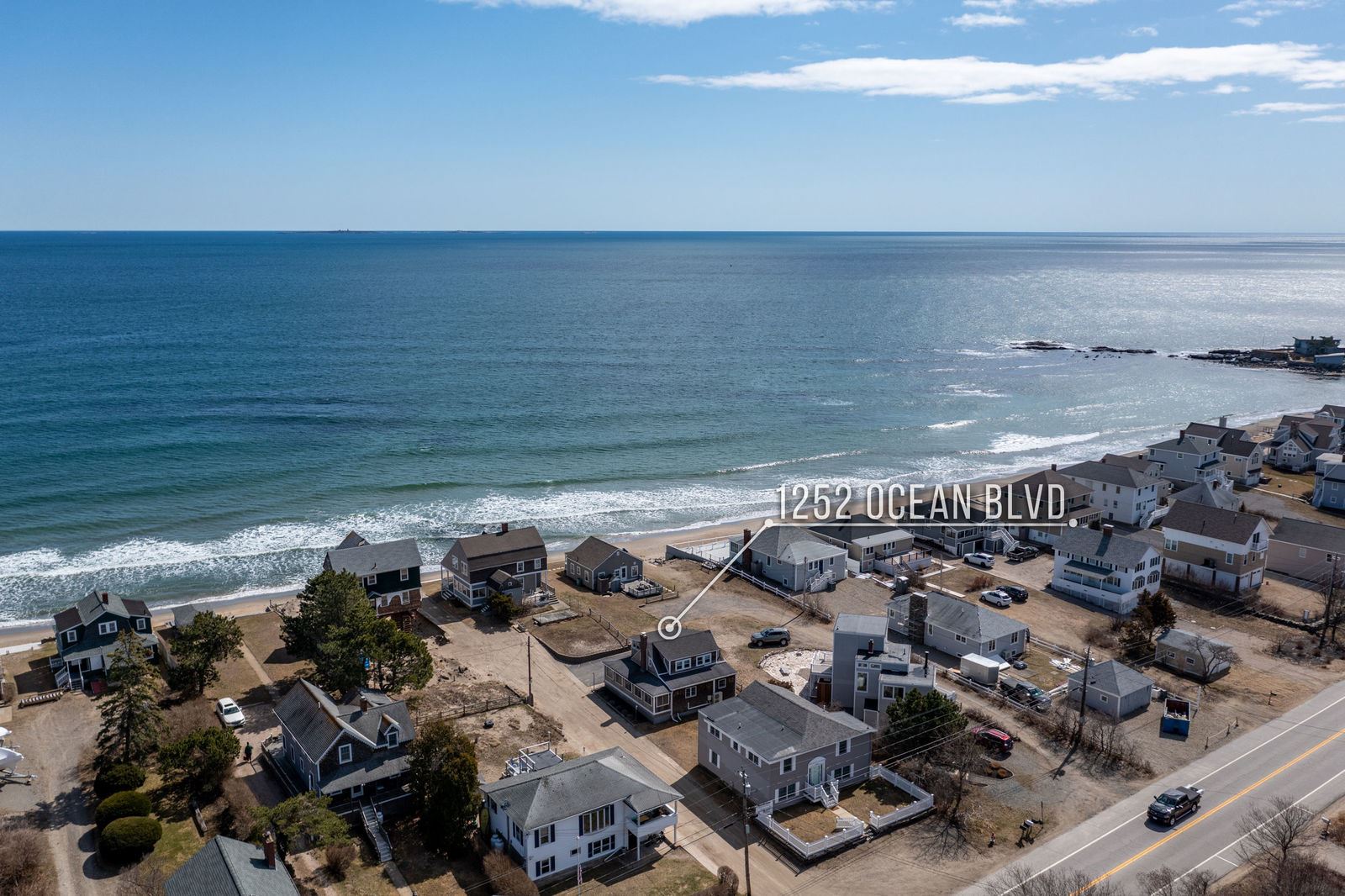 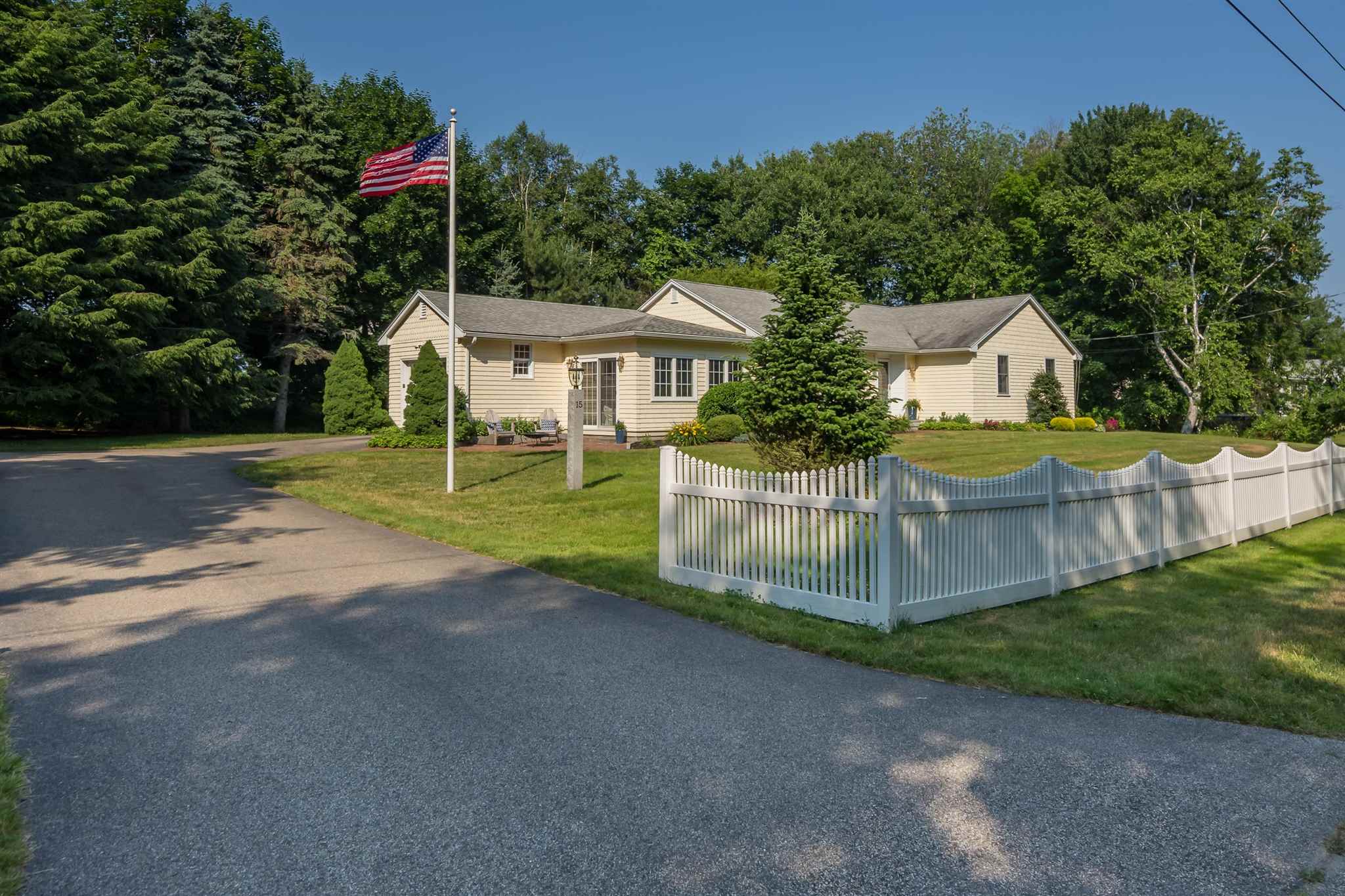 The NH Seacoast's most coveted neighborhood, the Rye Beach Precinct! Enjoy one level living just a short walk to gorgeous beaches and Abenaqui Country Club. With a multitude of updates, this home displays exceptional craftsmanship. The living and dining areas are open and bright with access to a large deck in the back yard for al fresco enjoyment. There is a 4-season heated sunroom off the kitchen with access to a patio, providing another option for outdoor entertaining. The renovated kitchen is spacious and sunny. There are gleaming hardwood floors throughout the main house. There are two ample sized bedrooms, one a master suite with walk in closet and en suite bath, and a second bedroom with a full bath conveniently located next to it. The package is complete with an attached garage, a mudroom with laundry and tons of storage, central A/C, a whole house generator, beautiful landscaping and irrigation. With over a half acre of land and a full walk up staircase to the attic the expansion possibilities are endless.

A great opportunity to have an office outside the home. This 1 room space has a common bathroom down the hall. Perfect for a downsized space. Rent includes all utilities including central air.

Copyright 2021 New England Real Estate Network, Inc. All rights reserved. This information is deemed reliable, but not guaranteed. The data relating to real estate for sale on this web site comes in part from the IDX Program of NEREN. The information being provided is for consumers' personal, non-commercial use and may not be used for any purpose other than to identify prospective properties consumers may be interested in purchasing. Data last updated April 19, 2021.

Call Us
Email Us

Customized your search and receive updates